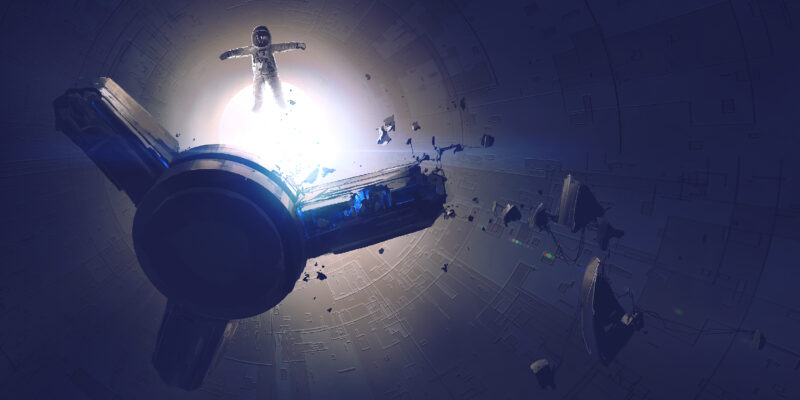 In April 2001, Dennis Tito, an American engineer, became the first ‘Space Tourist’ when he flew to the International Space Station (ISS) aboard Russia’s Soyuz spaceship. This was seen as a one-off show of mankind’s foray into Space by many, citing the expenses and technological inventions needed for more such adventures. However, the next two decades saw unprecedented advancement in Space-tech, and in 2019, American Space agency NASA announced that private individuals could stay in US modules of the ISS at $35,000 per night.

Gone are the days when exploration and privatisation of Space were just Sci-fi movie concepts. With innovations in Space-tech, the Sci-fi of yesterday has become the reality of today and will probably be the norm of tomorrow.

It comes as no surprise that the US – which has the highest number of satellites – is leading in investments in Space-tech: $28 billion in 3,086 companies. In fact, North America has seen a total of $102.2 billion in investment in Space-tech till last year, while the Asia Pacific region has got $41.7 billion and Europe, $31.6 billion, according to a SpaceTech Analytics Report 2021. China has only 288 Space-tech companies, in contrast to India’s 368. From small satellites’ and reusable launch vehicles’ manufacture to Space Mining and Defense communication, Indian startups have successfully forayed to a wide range of use-cases in the sector. 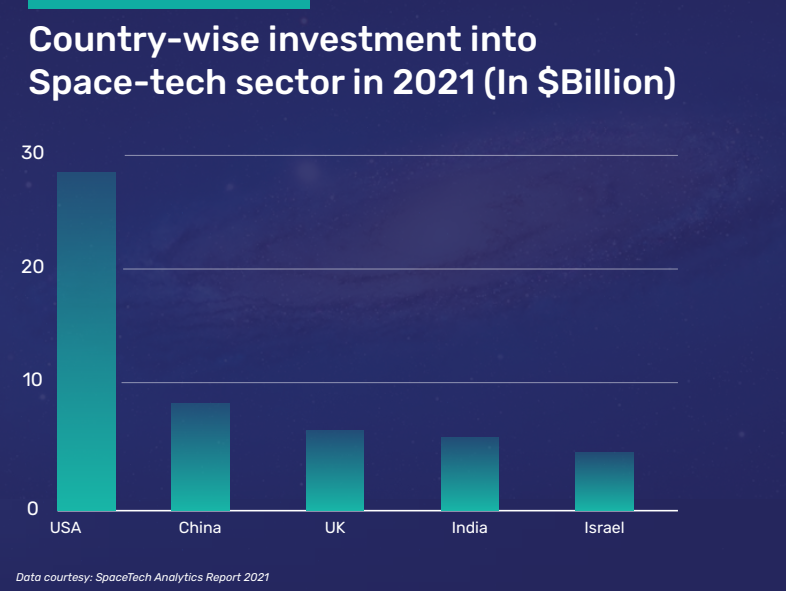 What’s more, the Indian regulatory framework has become friendly towards private players in Space-tech. In June 2020, as part of the Union Government’s decision to include private players in the Space sector,  the Indian National Space Promotion and Authorisation Centre (IN-SPACe) was formed.  The agency is expected to give India’s Space-tech startups a single-window navigation of all the multiple clearances that are required – they would otherwise be tapping on windows at the departments of Telecom, Defense, IT and others.

The Indian Space sector was valued at $7 billion back in 2019 and is expected to grow at a CAGR of 48% to reach ISRO’s target of $50 billion by 2024, a PWC report estimates. The time is ripe for investors to take this sector seriously.

Space-tech innovations are mostly in demand in sectors like Aerospace, Defence, Telecom, IT, Weather Monitoring / Climate Change, Remote Sensing, GPS Navigation, Satellite TV and Agriculture. The overarching play is to alleviate problems that obstruct space vehicle launch and other activities which can provide data relevant to these sectors. For example, the length of travel in space – a major obstacle in space exploration – is directly related to the performance of the existing propulsion systems. Clearly, improving propulsion systems is key for future space exploration. Many startups in India – like Agnikul Cosmos, Bellatrix Aerospace, and Skyroot Aerospace are focused on the same. These three, along with Pixxel, are also building Low-Earth Orbit (LEO) satellites which can serve private customers across sectors.

Miniaturised satellite manufacture and launch is another vertical that is witnessing a lot of action now. Dhruva Space and Astrogate Labs are among the startups in this space (pun fully intended). The reduction in cost enables governments and private players to leverage geospatial data for use cases such as weather, agriculture, insurance, and risk management, among others. 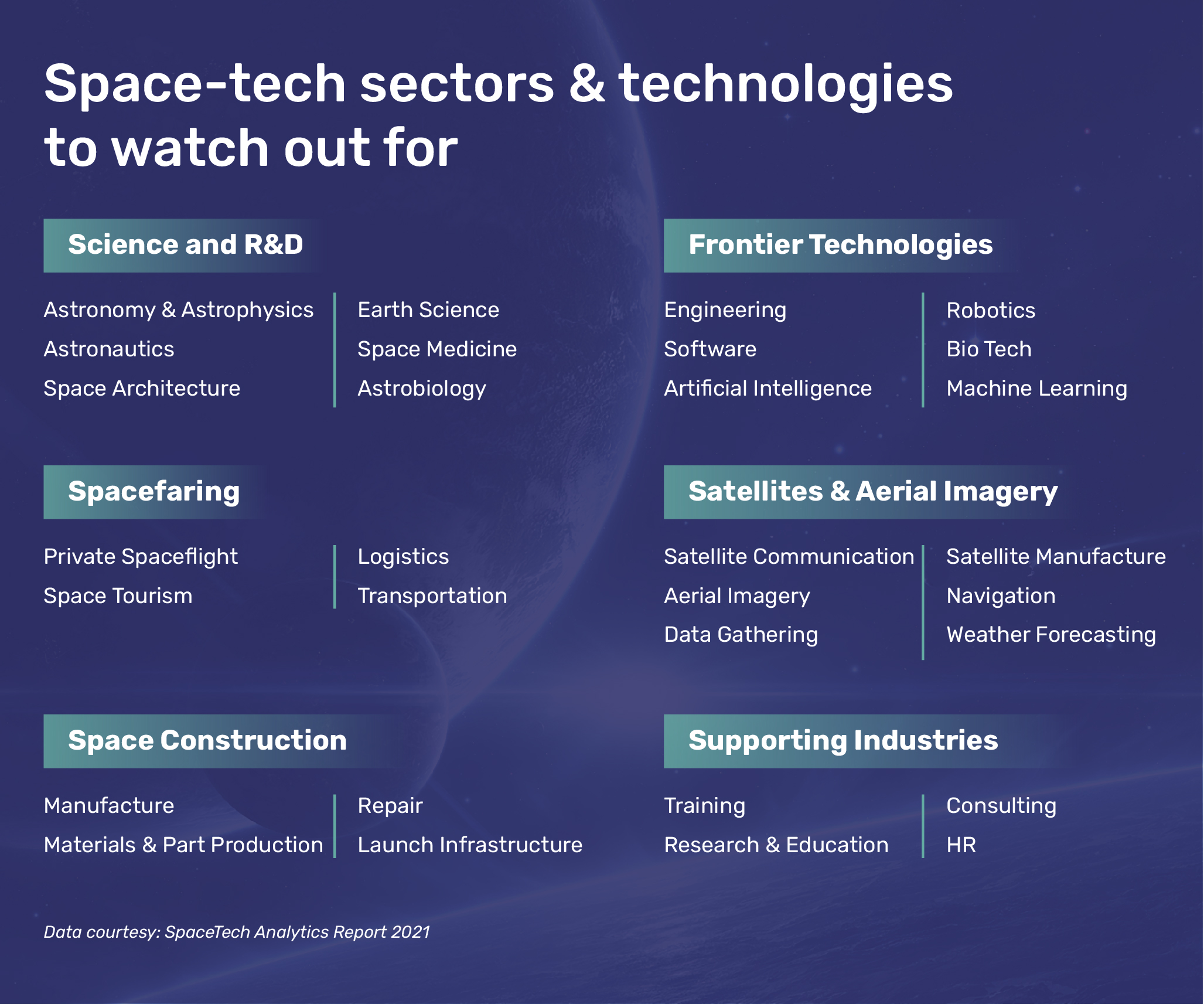 Market demand for geospatial data is on the rise. Enabling access to data collected from Earth observation is a huge opportunity. The likes of Kawa Space and GalaxEye are already established in this space. The former’s geo-intelligence platform saves time and money figuring out the data pipeline, infrastructure, model making and deployment, for satellite data users.

Kris Nair, founder and CEO of Kawa Space, says, “A notebook, pen, a bunch of 27 year olds and literally 32KBs of computing is what it took to go to the moon. We have come a long way since then, and the world is certainly ready to ingest all the satellite data in real-time, process it, and power multiple industry use-cases.”

Other upcoming sectors in Space-tech include fast and secure communications using satellites, and solutions for space traffic management and debris removal. From Life Sciences and Space Medicine to Space Mining, there are more sub-sectors coming up now.

Investments in Space-tech companies totalled $132.2 billion globally in 2020, according to the Space-tech Analytics Report. It also estimates Space-tech to be a $10 trillion industry by 2030, a huge jump from the $350 billion in 2021.

I believe that the dearth in Indian Space-tech is not for talent or innovation, but capital. About $7.7 billion of private investment went into Spacetech globally in the first nine months of 2021, according to Europe’s first Space-focused VC firm Seraphim Capital.  But in India, over the last two years VC firms have invested only about $90 million across 20 deals, as per Tracxn data.

Yet, there is hope. Indian Space-tech startups have raised a total of nearly $31 million in funding in 2021, according to YourStory Research’s analysis of disclosed deals, which is a 70% increase from the $18.2 million raised by the sector in all of 2020.

Investors including Blume Ventures, StartupXSeed and Inflexor Ventures have already placed bets on Indian Space-tech startups. StartupXseed, which launched a second fund of ₹200 crore for investing in seed and growth stages in deep tech, has also backed a number of startups working in space. Entrepreneur-turned-angel-investors Anand Mahindra, Vijay Shekhar Sharma, Mukesh Bansal, and a few others have invested in Space-tech startups already. 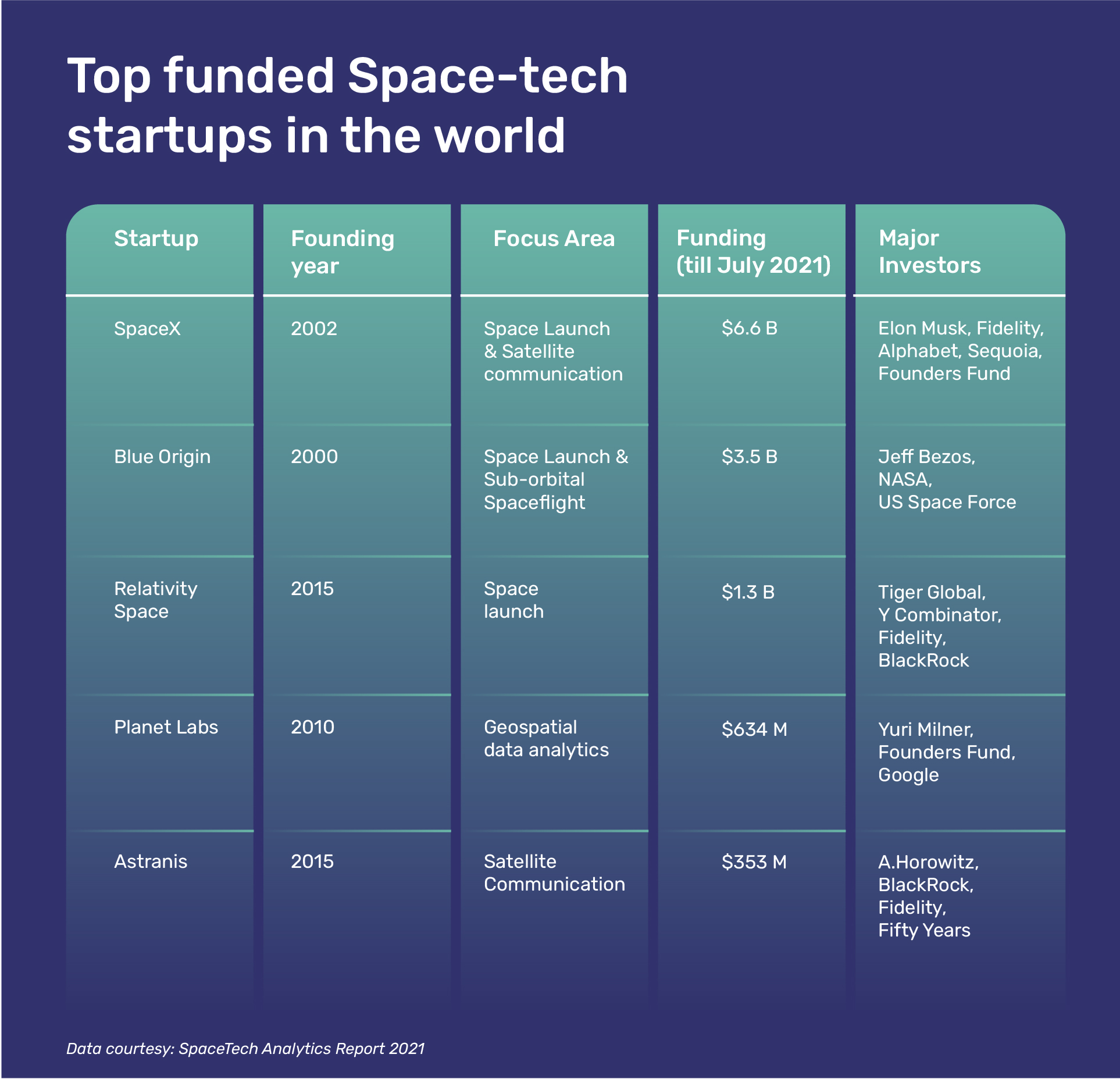 Kris Nair of Kawa Space is confident that the customer base for Indian Space-tech startups is global and growing very fast. “Indian companies will see 10x growth in the quarters to come,” he says.

Valuation is usually driven by the startup’s revenue model, growth rate, scalability and risks, target market size, and potential user base. But in some cases like Space-tech, the synergy between the resources, intellectual property, technology, and any financial assets decides the startup’s value. First-mover advantage and earning potential are also taken into account at times. Even though Space-tech requires a lot of specialist knowledge to vet the startups seeking funding, I think it’s easier if the (early stage) startup has a prototype ready for the market.

Although most startups in the sector are not above the Series B stage, government contracts can boost their growth and, in turn, investment potential. In the US and Europe, once VC-invested companies plan some credible products, space agencies (NASA and ESA) become their anchor customers. I hope that public-private partnerships (PPP) and government contracts will form the basis for B2B revenue streams for Indian Space-tech startups. The capability to expand into more verticals in this space is also significant in expediting profit-making.

The Space-tech Analytics Report suggests that although VC funds currently categorize Space-tech companies according to their stage, Technology Readiness Levels (TRL) will be of far greater significance. This parameter – which assesses the maturity level of any technology- ensures data-driven analysis and enables calculations of the value of a company.

Currently, about 95% of the funding in Space-tech goes to satellite manufacture and launch companies. The most significant short and medium term opportunities, however, will come from satellite broadband internet access. (There is increased demand for bandwidth from IoT, AI, VR, and autonomous vehicles.) 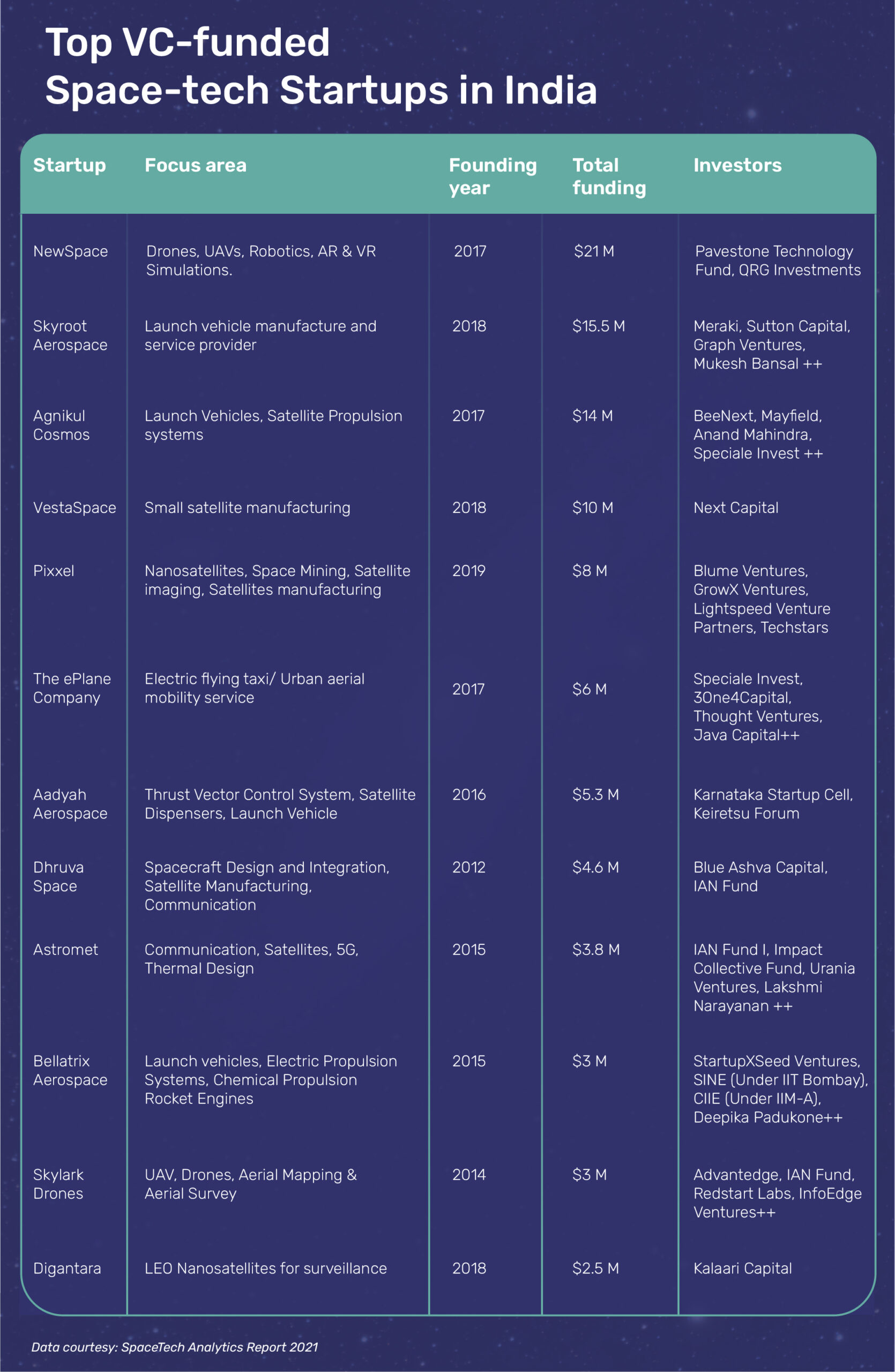 Morgan Stanley estimates that broadband will represent 50-70% of the projected growth of the global space economy by 2040. As the demand for data goes up, launching satellites that offer broadband internet service will help drive down the cost of data. Currently, the cost of access to space is dipping, bringing data costs down too. Efforts in Space-tech can make satellites cheaper than ever – which can lead the way for cheaper internet in rural areas.

​​Srinath Ravichandran, Co-founder and CEO of Agnikul Cosmos, is hopeful that the government’s new steps will help expand the Space-tech ecosystem. “Government support will encourage more people to come into this sector; currently Space-tech is seen as a niche sector for startups. With more awareness, more investment will also flow in (and vice versa),” he says, adding that India has an edge over China and the US, thanks to ISRO’s cost-efficient ways. Remember, India’s Mars Mission – Mangalyaan – was the cheapest mission to Mars! 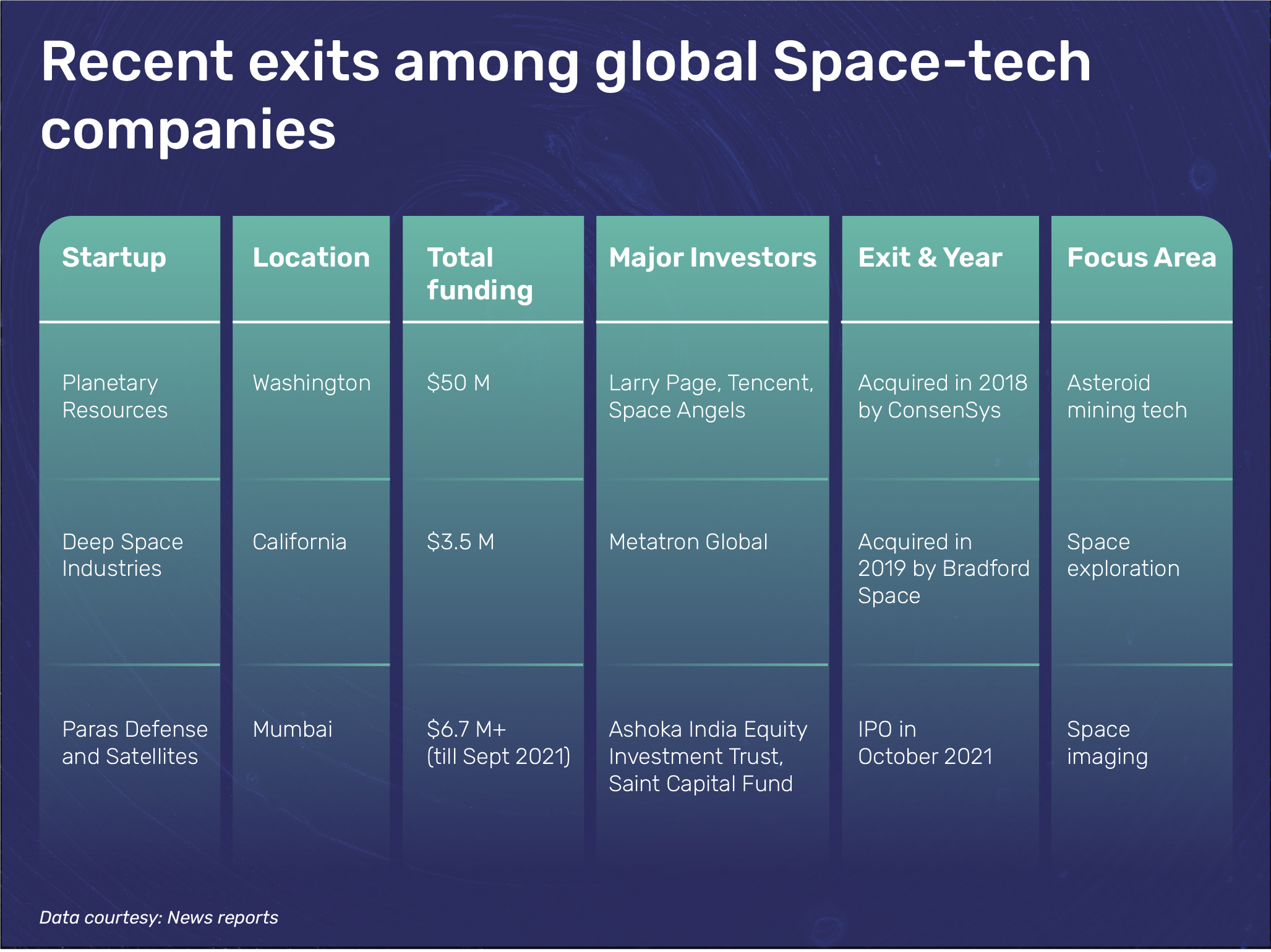 Srinath also points out another advantage: Space-tech startups in India have ready access to the network of vendors (across manufacturing, electronics and other sectors) who have been hand-held by ISRO. “They are willing to work with startups too, as startups provide a larger customer-base,” he says.

Additionally, when it comes to space data, innovations with AI and blockchain to offer secure solutions are already on the works. Smart propulsion mechanisms through clean rockets for sustainability, and management of activities like satellite servicing and industrial missions also offer more business opportunities. Several space tourism companies – led by Boeing, Virgin Galactic, Blue Origin and SpaceX- are about to start commercial suborbital flights.

If Elon Musk is to be believed, even colonisation of Mars and exploration of extraterrestrial life may not be too far away.  For investors, it is time to onboard this ship!